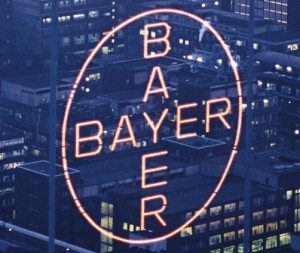 Steve’s breakdown: The article blow is very technical but here’s the gist of it: Bayer has worldwide exclusive marketing rights for Xofigo

PITTSBURGH, PA: Xofigo (radium Ra 223 dichloride) has been approved by the US FDA for symptomatic late-stage (metastatic) castration-resistant prostate cancer that has reached bones but not other organs, i.e. with no known visceral metastatic disease.

The Food and Drug Administration (FDA) approved Xifogo under the priority review program, three months ahead of schedule.

According to an online FDA communiqué published this week, Xofigo is aimed at male patients whose prostate cancer metastasized despite receiving medical or surgical interventions to reduce testosterone levels.

Testosterone, the male sex hormone, stimulates the growth and spread ofprostate cancer. Prostate cancer develops in the prostate, a gland in the male reproductive system located below the bladder and in front of the rectum.

Quoting statistics from the NCI (National Cancer Institute), the FDA informs that approximately 238,590 men in the USA will be diagnosed with prostate cancer this years – 29,720 patients will have died of the disease in 2013.

The FDA was scheduled to make a decision on Xofigo by August 14th, 2013. However, approval came through early because the medications was reviewed under the FDA’s priority review program, which allows for a speedier process if the medication appears to provide safe and effective treatment and no alternative therapy is available. Drugs which offer significant improvements compared to currently available options are sometimes processed through the same program.

In August 2012, the FDA approved Xtandi (enzalutamide) for patients with metastatic castration-resistant prostate cancer that has recurred or spread, including those who received medical or surgical therapy to reduce testosterone. Enzalutamide was approved to be taken in combination with another cancer drug, docetaxel.

When considering whether to approve Xofigo, FDA experts looked at data from one human study, the Phase III ALSYMPCA trial involving 809 patients with symptomatic castration-resistant prostate cancer that spread to bones but not other organs. Patients were randomly selected into one of two groups – the Xofigo or placebo plus best standard of care group.

The main endpoint of the study was overall survival. A pre-planned interim analysis showed that patients given Xofigo lived for an average of 14 months, compared to 11.2 months in the placebo group. Experts also looked at an exploratory updated analysis which was done later – data confirmed extended overall survival among those in the Xofigo group.

According to Bayer HealthCare, the commercial production of Xofigo is currently underway, initial doses should be on the shelves within a few weeks. Bayer has worldwide exclusive marketing rights for Xofigo. In the United Sates, Xofigo will be co-promoted by Bayer HealthCare and Algeta US, LLC.

North American Principal Investigator for the pivotal trial, Dr. Oliver Sartor, medical director of the Tulane Cancer Center, said “Most men with advanced prostate cancer develop bone metastases, which can be life-threatening. Xofigo has demonstrated an anti-tumor effect on bone metastases and an overall survival effect in prostate cancer, making it an important addition to the treatment of CRPC (castration-resistant prostate cancer) patients.”

Xofigo’s active ingredient, radium 223 dichloride (radium 223) is an alpha particle-emitting radioactive therapeutic agent which undermines the development and growth of tumors on bone metastases. According to Bayer “Radium 223 mimics calcium and forms complexes with the bone mineral hydroxyapatite at areas of increased bone turnover, such as bone metastases. The high linear energy transfer of alpha emitters may cause double-strand DNA breaks in adjacent cells, resulting in an anti-tumor effect on bone metastases. The alpha particle range from radium 223 is less than 100 micrometers, which may limit damage to the surrounding normal tissue.”

EMA (European Medicines Agency) has not yet approved Radium 223, neither has any other non-US regulatory body. Bayer says it has submitted a Marketing Authorization Application to EMA for Radium 2234 in December 2012 for the treatment of castration-resistant prostate cancer.