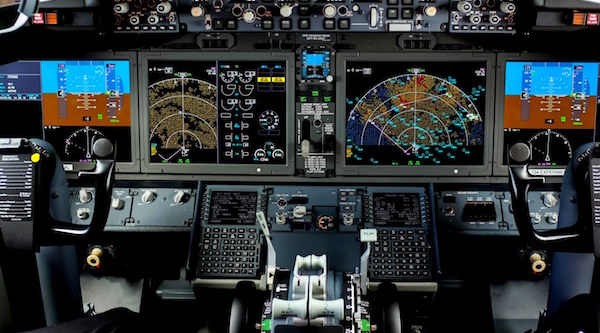 Steve’s breakdown: There’s probably no one who would argue that Boeing’s brand is in some trouble. They even sent out a video message from the company’s Chairman to the world.

What might be the next move for Boeing is to go into full pitch mode to get great ideas OR try the big money moment. March Madness is here already. What can they do that’s huge?!?!

In recent days, reports have surfaced that the Chicago-based company was already studying software issues before the more recent March 10 Ethiopian Airlines crash. Crisis management experts say that Boeing now faces the difficult task of reassuring consumers uneasy about flying safely on its planes, which are flown by a large variety of airlines including Southwest, American and United.

“The long-term reputation damage here is really bad for Boeing,” says Gene Grabowski, a partner at crisis management firm Kglobal, noting that the unease has trickled far beyond the B2B level as passengers are now asking travel agents to make sure they are not booked on Boeing 737 Max planes.

On Monday, Boeing released a letter from Chairman, President and CEO Dennis Muilenburg that touted actions the company is taking to ensure its planes are safe. The company plans to release a software update and revise its pilot training.

“Together, we’ll keep working to earn and keep the trust people have placed in Boeing,” read the statement. A spokesman from Boeing did not respond to a request for further comment.

But many people have already lost trust, experts say. Some of that comes from reports that Boeing initially said its planes were safe, but was actually working on a software upgrade even before the March tragedy.

“Senior executives at companies often try to defend before they know what the true facts are,” Grabowski says. “Consumers or passengers of airlines will forgive a crisis, they’ll forgive mistakes, but they will never forgive a cover-up, or a perceived cover-up.”

On social media, consumers have been crying foul. 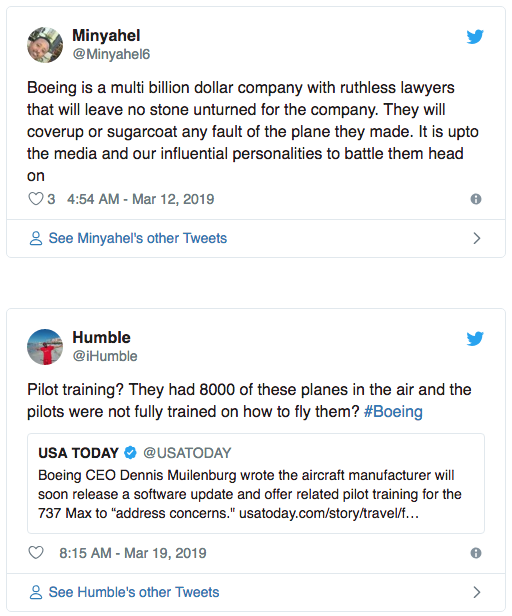 Now, Boeing will need to educate the public on what it did following the recent crash and try to align its messaging with airlines, according to Thom Fladung, managing partner at Hennes Communications. He notes that Boeing should look to its marketing playbook following the 2013 grounding of its Dreamliner jets, which had battery issues.

“These are obviously not the first types of planes ever grounded,” says Fladung. “To protect their reputation, they have to communicate.”