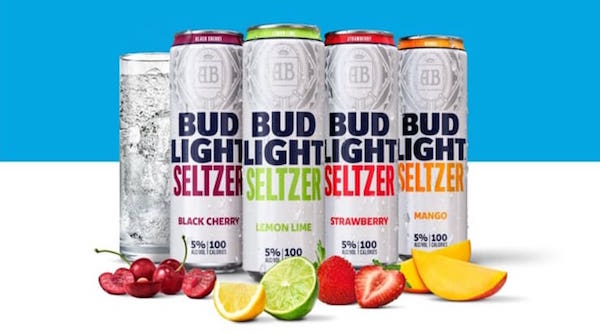 Steve’s breakdown: Bud Light Seltzer is a ridiculous name and I have no idea why they think the Bud Light brand can carry this launch when the beer that’s called Bud Light is having enough trouble. The Corn Syrup campaign was so brilliant and then they do this piece of shit. UG!

Now get in there and fix this before they lose millions!

BTW: Michel Doukeris, who was named Anheuser-Busch’s North American president and CEO in November 2017 after 21 years with the brewer, most previously as chief sales officer said “I’m trying to reframe the company.”

Into what, a puddle?

Anheuser-Busch remains the king of beers, ruling nearly 41% of the $119 billion U.S. market for beer and malt-based beverages. But there’s trouble in the consumer market for the iconic maker of Budweiser, Bud Light, Michelob Ultra, Goose Island and dozens of other brands. Americans are drinking less beer and more wine and spirits, while also imbibing alcohol-infused seltzer, cider, kombucha and other potent potables. At the same time, the entire beer industry continues to grapple with the unrelenting rise of craft breweries across the country, which have already captured nearly a quarter of total sales volume.

In the latest response to these trends, Anheuser-Busch is upping its ante in the fast-growing hard seltzer market with the launch early next year of Bud Light Seltzer. The company already has two products in the category, Bon & Viv and Natty Light Seltzer, but hopes that leveraging this latest entry against the nation’s most popular beer will give it a leg up on the competition. Bud Light Seltzer will come in four fruit flavors, each containing 5% alcohol by volume, 100 calories, 2 grams of carbs and less than 1 gram of sugar, appealing ingredients among the young non-beer drinkers who can’t seem to get enough of the spiked bubbling waters.

This is part of a wider transformation under way at Anheuser-Busch — the St. Louis-based company acquired in 2008 by Belgian brewer InBev for nearly $52 million and now under the AB InBev global umbrella — which is revamping its established product-development and marketing methods. The strategy centers around growing its market-leading portfolio of existing brands while introducing “beyond beer” products, in particular hard seltzers, a category the company is pouring $100 million into next year.

It’s easy to see why. The hard seltzer market is currently worth $550 million and could grow to reach $2.5 billion by 2021, said Sean King, an analyst at UBS. The thirst for seltzers follows the trend, especially among Gen Zers and millennials, away from traditional beers and toward lighter and healthier beverages — while still getting a buzz. That worked back in the 1970s with the introduction of light beer (tastes great, less filling), so why not catch lighting in a bottle, or a can, again?

The tech start-up inside a beer giant

“The reason I came here was to move the company to the next level,” said Michel Doukeris, who was named Anheuser-Busch’s North American president and CEO in November 2017 after 21 years with the brewer, most previously as chief sales officer. “I’m trying to reframe the company.”

Look no further than Manhattan’s Chelsea neighborhood, where Anheuser-Busch has built a “commercial strategy office,” its label for the 12-story retrofit more suitable to a tech start-up than a 167-year-old brewmeister. Casually attired millennials and Gen Zers congregate in open spaces, brainstorming about things like Apollo 11, the consumer-centric, data-driven innovation program named, no doubt, to inspire moonshot ideas.

The CNBC Evolve Summit returns to LA on June 9, 2020. Registration for this event is now open.

One giant leap is an overhauled concept-to-shelf product-development process, which used to take almost two years but can now be executed in less than 100 days. For instance, its marketers are moving away from focus groups, replacing them with an online panel of more than 6,000 consumers who communicate daily with the company via social media.

“We have 40 people on the twelfth floor who are just coders,” said Doukeris of the non-traditional workforce. He’s sitting on a bar stool in the ground-level microbrewery, called 24th Street Hops, where small batches of beers are whipped up for on-site taste-testing. The building also houses ZX Ventures, the company’s four-year-old innovation and investment group, and Draftline, its in-house ad agency that supplements the creative work of more than 50 outside agencies of record. The unit showed off its nimbleness during this fall’s World Series, cranking out an ad and PR blitz the day after a Washington Nationals fan “caught” a home run ball against his chest, saving the Bud Lights clutched in both hands.

Beer is still the most popular boozy beverage in the U.S., which is AB InBev’s largest market, accounting for $15.5 billion of its $54.6 billion in global revenue last year. Sales by volume, however, have been steadily declining. In October, the global company lowered profit growth forecasts for 2019 after reporting lackluster third-quarter performances in the U.S., China, Brazil and South Korea.

“We have a demographic situation that the beer industry has never had to deal with before,” said Lester Jones, chief economist of the National Beer Wholesalers Association, which represents around 3,000 distributors that deliver products to liquor stores, restaurants, bars and other licensed retail outlets. As boomers and millennials mature, and Gen Z comes of drinking age, brewers face a daunting balancing act of retaining brand loyalists while simultaneously attracting new customers. “Unlike 25 years ago when they didn’t have to worry about this, today companies are walking a tight wire between keeping people engaged with innovation and with legacy brands,” Jones said.

Although those conglomerates dominate the beer marketplace, the actual number of brewers has exponentially grown in recent years, to nearly 7,500, most of them small, local craft beer makers that have significantly disrupted the industry. According to the Brewers Association in Boulder, Colorado, which represents small and independent craft beer makers, overall U.S. beer volume sales were down 1% in 2018, while craft sales continued to grow at a rate of 4% by volume, reaching 13.2% of the U.S. beer market by volume. Retail dollar sales of craft increased 7%, to $27.6 billion, and now account for more than 24% of the U.S. beer market.

The roots of Anheuser-Busch’s current transformation can be traced back to the craft revolution, which really began in the 1980s, when Sierra Nevada, Sam Adams and several other upstart brands introduced alternatives to lighter lagers, pilsners and ales. The interlopers grew and gained incremental market share, enough to eventually spawn a craft buying spree by Anheuser-Busch.

Starting in 2011 with the purchase of Goose Island, the company’s craft division, Brewers Collective, purchased a dozen craft brewers, including Elysian, 10 Barrel, Golden Road and Platform. On Nov. 11, Anheuser-Busch announced it will buy the remaining 68.8% of Craft Brew Alliance that it doesn’t already own in a deal valuing the Portland-based company at about $321 million. CBA’s popular brands include Kona Brewing and Redhook Brewery.

Meanwhile, the thousands of craft Davids across the country are hardly ceding the market to the beer Goliaths. “There is incredible enthusiasm, momentum and innovation going on among independent craft breweries,” said Julia Herz, director of the Brewers Association’s craft beer program. Nonetheless, she adds, “it’s getting harder and harder to compete, especially if you want to sell at liquor stores or restaurants,” outlets the majors largely control.

The association has responded by creating the independent craft brewer seal, a logo printed on products and displayed at retail to certify their indie source. The seal also differentiates them from craft beers acquired by big brewers, which aren’t allowed to use it, Herz said. More than 4,700 Brewer Association members have signed onto the campaign to date, she said, adding that “we continue to hear from members that they need to fight to get access to markets and attention from beer lovers.”

If our main objective is to serve consumers, our portfolio of brands should reflect what they’re looking for.

Doukeris said AB InBev is open to expanding Brewer Collective’s craft portfolio “if at any point in time we find another opportunity.”

Meanwhile, the company is revving up its innovation engine with core brand line extensions tied into consumer trends. “If our main objective is to serve consumers,” he stated, “our portfolio of brands should reflect what they’re looking for.”

For example, tapping into the health and wellness movement, it introduced Michelob Ultra Pure Gold, an organic version of its fastest-growing product. To address the flavored booze rage, it came out with Bud Light Orange.

Venturing into the expansive “beyond beer” market, Anheuser-Busch bought Babe Wine, sold in bottles as well as cans, and then piggybacked on its relationship with the NFL to make Babe the league’s official wine. This year it purchased Cutwater Spirits, a San Diego distiller that makes 14 different ready-to-drink canned cocktails. And the company is partnering with Keurig Dr Pepper on Drinkworks, an at-home cocktail-making machine. After a successful pilot test in St. Louis, Drinkworks is being rolled out in Florida, California, Pennsylvania, Illinois and New York.

Hard seltzer, though, is the “it” realm that Anheuser-Busch wants to conquer in a battle with White Claw from Mark Anthony Brands (which also makes Mike’s Hard Lemonade), Boston Beer’s Truly hard seltzer line and other players. AB InBev first dipped its toe into the fizzy waters a few years ago when it acquired Spiked Seltzer and rebranded it as Bon & Viv. It’s also leveraging the Natural Light brand with a line of Natty Light flavored hard seltzers, and early next year will introduce Bud Light Seltzer.

“Our overall investment in innovation next year will grow by 20% in the U.S.,” Doukeris said. “Just behind seltzers,” he added, “we will be investing more than $100 million. We really want to make this category fly.”

“The market is ever-changing, consumers are always evolving,” he said. “Change is an unbelievable opportunity for companies that embrace it. If we continue to take care of our own brands, and add an innovation capability, where we understand what consumers want, then we can have the best of two worlds. It’s not a choice between established brands and innovation. The combination will make the company stronger.”