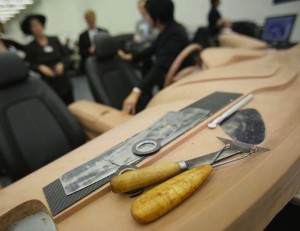 Steve’s breakdown: Both Lincoln & Cadillac are doing makeovers. And both are taking it seriously so look for opportunities here and there.

Quote of the article: “Our ambition is not to be No. 1,” said Jim Farley, head of global sales and marketing. “We’d rather have a few people love us than everybody like us.”

DEARBORN, MI: Lincoln offered a peek Thursday at its first dedicated design studio since the 1970s as the luxury brand continues its makeover.

Decades ago, Lincoln was the best-selling luxury brand in the U.S., but Mercedes-Benz, BMW, Lexus and Infiniti raised quality and technology expectations. Ford stopped investing in new products. Many Lincolns were just rebadged Fords with more chrome.

Lacking an identity, sales continued to fall. The 2013 MKZ that will go on sale later this year will be the first all-new Lincoln in what is expected to be a revival that includes three more new products over the next three years.

“The MKZ is a first small step for the brand,” said J Mays, head of Ford’s global design.

The midsize car enters a $274-billion luxury market forecast to grow almost 8% globally next year, double the rate of the rest of the market, according to IHS Automotive.

Mark Fields, Ford president of the Americas, said competition to win the luxury crown in the U.S. is heating up. Last year, BMW edged out Mercedes-Benz by fewer than 2,700 vehicles. The new MKZ’s late on-sale date won’t move the needle for Lincoln this year.

“Our ambition is not to be No. 1,” said Jim Farley, head of global sales and marketing. “We’d rather have a few people love us than everybody like us.”

To keep its identity separate from the Ford brand, Lincoln now has its own studio in space carved out in the Product Development Center. Lincoln’s chief designer, Max Wolff, was recruited from Cadillac nearly two years ago.

Ford brand people are not allowed. This is Lincoln’s nerve center, housing a team of 130, including designers and clay modelers. Within the creative firewall, future products for Lincoln will be envisioned, designed and engineered.

“Style is not just poured over the top of engineering. The combination of style and engineering is design,” Mays said.

The brain trust housed here will also oversee unique Lincoln marketing and a leaner, more-upscale dealer network. Each showroom and service center is charged with offering an upscale customer experience.

Earlier this year, Ford CEO Alan Mulally announced that Lincoln will begin selling vehicles in China in the second half of 2014.

Lincoln’s success depends on how quickly it raises its volumes and globalizes, said Michael Robinet, managing director of IHS Automotive Consulting in Northville.

“Lincoln doesn’t have the right products to make an impact in global markets. They need a compact car,” Robinet said. Lincoln does plan to offer a compact crossover in the U.S. by mid-decade.

As an international brand, the theory goes, Lincoln should compete more effectively with Cadillac, BMW, Mercedes-Benz, Audi and Lexus.

Ford did not change any dimensions of the MKZ for the China market, but colors and materials will reflect Chinese preferences, said Moray Callum, head of North American design.

There are more controls in the backseat, such as a “dump switch” that allows backseat passengers a better view. Luxury car buyers in China have chauffeurs. Farley said standards for dealers in China have been set, and hundreds of applications have been received as the recruiting process continues.

“We want our dealers to be extremely successful in China,” Farley said.