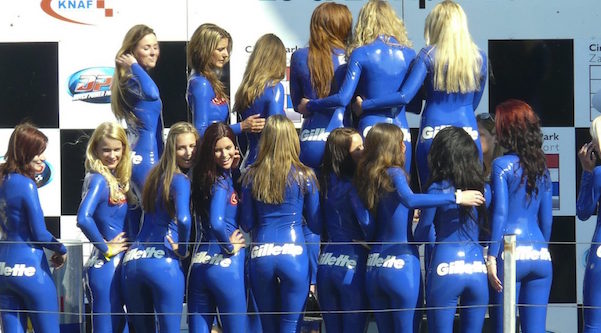 Steve’s breakdown: As a NY/NJ football fan, I’m loving this story! As a new business fan, I’m smelling an opportunity.

So Patriots owner Robert Kraft, who was caught on video gettin’ some at a house of ill repute, has gotten so many people in a tizzy they put a petition together asking P&G to pull the Gillette name off the Foxborough, MA stadium. Why? Because the new Gillette tagline, “the best a man can be”, is supposed to reflect how real men should feel about the #MeToo movement and that is counter to what Kraft did on video. (and don’t forget human trafficking element of this story)

Anyway, we said from the beginning the new Gillette campaign was bogus and was clearly forced. The featured photo is exhibit A on that.

Now Gillette is between a rock and a stupid place. Do they just admit they were faking their #MeToo attitude or do they pull the Gillette name off the stadium?

Either way, agencies should be brainstorming this situation and getting their work over to P&G or Gillette. Where ever your storms may take you . . .

BOSTON, MA: With Patriots owner Robert Kraft facing multiple criminal charges, thousands of people around the country are now asking Proctor and Gamble to pull the Gillette name off of the Patriots’ stadium in Foxborough, Massachusetts.

In the weeks after Kraft was charged in Florida with two misdemeanor counts of soliciting another to commit prostitution, a petition was started asking P&G to pull the name, and as of Sunday, nearly 20,000 people had signed on asking the company to drop the Gillette name.

The Patriots’ stadium, which opened as CMGI Field in 2002, was renamed Gillette Stadium in 2003 after the company agreed to a 15-year deal with the team. Although Gillette was later purchased by P&G, a new deal was hammered out in 2010 that ostensibly keeps the naming rights in place until 2031. The petition asks that P&G pull the Gillette off the stadium now.

The petition states that the charges against Kraft don’t mesh well with Gillette’s new ad campaign, which asks men to be the best they can be.

“Gillette, the company behind popular shaving and personal care products, recently changed its tagline to “The Best Men Can Be,” the petition states. “But more than just a tagline, the statement represents the brand’s commitment to promoting healthy representations of what masculinity means — a decision made in response to the #MeToo movement and news story after news story showing men not behaving their best.”

Kraft and hundreds of other men were charged on February 22 as part of a human sex trafficking investigation that was being carried out by authorities in Florida. According to the petition, the charges against Kraft should be enough to get P&G to pull the Gillette name.

“It’s nice to see a brand use their influence for good, but now it’s time to see if they will actually back up their words with action,” the petition states. “That’s why we’re asking Gillette to stop sponsoring Gillette Stadium, the home stadium for the New England Patriots — owned by Robert Kraft, who was just arrested during a human trafficking sting operation.”

Kraft sent out a carefully worded apology on Saturday that didn’t specifically mention the criminal case in Florida.

“I am truly sorry,” Kraft said. “I know I have hurt and disappointed my family, my close friends, my co-workers, our fans and many others who rightfully hold me to a higher standard.”

As for the human trafficking, Kraft’s lead attorney, William Burck, says there’s no evidence that anything like that took place.

“Sheriff [William] Snyder and Jupiter police chief Daniel Kerr from the outset have said this is a human trafficking case, but have produced no evidence [to corroborate that],” Burck said. “They have falsely connected Robert Kraft and other men to human trafficking.”

Kraft was actually offered a plea deal last week. In the deal, Kraft and 24 other men charged with soliciting prostitution would have their charges dropped in exchange for them admitting they would’ve been found guilty, doing 100 hours of community service, completing a class on the dangers of prostitution, and paying $5,000 per count.

Although it’s unclear if any of the other 24 men accepted the plea deal, Kraft shot down the deal, which means he’s now headed to his first court date on Thursday. That first court date will come just one day after the NFL‘s annual league meeting concludes in Arizona.