New Marketing Exec dives in at the WWE

Home Industry: SportsNew Marketing Exec dives in at the WWE

New Marketing Exec dives in at the WWE 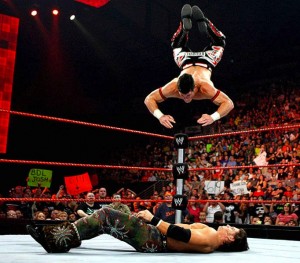 Steve’s breakdown: This is one of those appointments that begs the question: how can I squeeze money out of these people?

Besides the obvious puns, pitching new ideas to new business prospects regarding the WWE works. There’s also the bigger idea of finding sponsors via marketing for the WWE. That’s where the real cheesecake is.

As head of WWE’s Global Sales & Partnership Marketing division, Pine will be a key member of the company’s senior management team. He will be responsible for providing strategic vision for WWE’s sales operation and ensuring revenue growth is aligned with company objectives and values.

Pine brings 15 years of experience in strategic sales and marketing across a variety of major sports properties and brands. Prior to joining WWE, Pine was IMG’s Vice President of National Sales for the company’s College Division. In this role, he was responsible for the daily development of national sales for IMG’s College and NCAA corporate champions, and their partner programs with Turner and CBS business units. He managed IMG College’s two largest national corporate partnerships, UPS and MillerCoors, accounts which exceeded $100 million.

Pine was a U.S. Air Force Captain and served from 1993 — 1999. He earned his M.B.A. from Golden Gate University in San Francisco, California and his undergraduate degree in Behavioral Sciences from the U.S. Air Force Academy.

WWE, a publicly traded company (NYSE: WWE), is an integrated media organization and recognized leader in global entertainment. The company consists of a portfolio of businesses that create and deliver original content 52 weeks a year to a global audience. WWE is committed to family-friendly entertainment on its television programming, pay-per-view, digital media and publishing platforms. WWE programming is broadcast in more than 150 countries and 30 languages and reaches more than 600 million homes worldwide. The company is headquartered in Stamford, Conn., with offices in New York, Los Angeles, Miami, London, Mumbai, Shanghai, Singapore, Istanbul and Tokyo.

Additional information on WWE (NYSE: WWE) can be found at wwe.com and corporate.wwe.com. For information on our global activities, go to http://www.wwe.com/worldwide/.