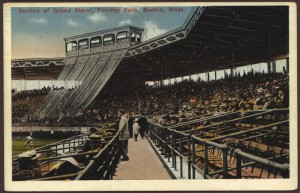 Steve’s breakdown: This could be the perfect opportunity for an agency with a great idea to come out of left field and win a nice project for the team. And by the way, we’ve been keeping an eye on the Red Socks. Last February we reported Red Sox promote seven executives.

BOSTON, MA: Red Sox fans devastated by the September disaster might go so far as to make a New Year’s resolution to never give another nickel of their hard-earned money to that team — but they’ll have a hard time keeping that promise.

In 2012, the bunting will adorn Fenway Park [map] not just for Opening Day, but for the ballpark’s 100th anniversary, and diehard fans will find themselves tempted with hundreds of ways to spend cash on centennial souvenirs.

“It gives the team the opportunity to re-merchandise all the things they’ve been selling. I can’t imagine how this can’t be a pot of gold,” said Chris Cakebread, a sports marketing expert and advertising professor at Boston University.

The team officially launched its 100th anniversary celebration of Fenway yesterday, but the Sox had long been busy planning special events and commissioning a commemorative logo to slap on T-shirts, hats, pennants — and a hefty, $75 coffee-table book hitting stores at the height of the holiday shopping season.

Sox brass insist they won’t be getting rich off the 365-day Fenway nostalgia tour.

“This really comes with a lot of expenses for the events we’re putting on,” said Sam Kennedy, the team’s chief operating officer. “It’s not a financial windfall for the club by any stretch. The goal is to sort of break even.”

Sales of all those anniversary T-shirts, throwback jerseys and commemorative pins will be mixed into a single revenue pie that feeds all 30 Major League Baseball teams — so the Sox only get a slice.

“There will be some incremental merchandise revenue opportunities, but we only get a small percentage,” Kennedy said.

Sports business experts see the Sox scoring more corporate sponsorships next year, thanks to the extra visibility afforded by a year-long celebration and series of special events. The fun begins with “Frozen Fenway” college hockey in January and may culminate with the return of football to the field of dreams in the fall — and the summer between stocked with summer concerts and another soccer match, likely featuring Liverpool.

“It’s not confined to the baseball season,” said Tim Marken, founder of the Hub’s Altus Marketing and Management. “They’ve got all these other events taking place at Fenway that will get the taste and touch and feel of that 100th anniversary.”

“It’s a great sponsorship opportunity,” added Cakebread. “How could you not want to be associated with this?”

Sox minority owner Michael Egan said he’s proud of how the ballpark has been preserved and the celebration ahead that will “almost elevate Fenway to an even greater iconic status.” Still, he’s disappointed that the MLB declined to schedule the 2012 All-Star Game in Boston.

“That really would’ve helped the corporate sponsors tremendously and given them a return on their investment,” Egan said.

Hub tourism expert Pat Moscaritolo predicts the Fenway party will be a favor to the local economy. The Sox’s 81 home games generate an average of $1 million in revenue for hotels, restaurants and other businesses that cater to fans who come to town and stay overnight. Moscaritolo estimates the anniversary atmosphere could boost each game’s impact by $200,000.

“I think we’ll see a larger share of people coming from outside of Boston to celebrate these events than you would normally expect,” he said. “We’ll see more multi-generational trips.”

That may secure Fenway’s record sellout streak, stretching back to 2003, for another season — although Kennedy refused to count the tickets before they go on sale tomorrow.

“We never take that for granted,” he said. “Even with the fact that it’s the 100th anniversary, we need to come out of the gate strong. We need to earn the trust and confidence of the fan base.”