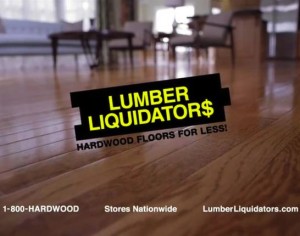 Steve’s breakdown: Just another reminder to keep your eye on these folks. They are still looking for a CEO and now the CMO is also handling merchandising.

Something’s going to snap so be ready to catch it.

Schlegel’s last day will be Friday, the troubled flooring retailer said. He will be replaced by Chief Marketing Officer Marco Pescara, who will hold both roles. Pescara has been with the company for nine years.

Lumber Liquidators did not say why it was firing Schlegel, and a representative did not immediately respond to a request for comment. The decision to fire him was made last Friday, the company said in a filing with the Securities And Exchange Commission.

Last month, Lumber Liquidators said that it had suspended the sale of all laminate flooring made in China after disclosing that the Justice Department is seeking criminal charges against it. The news show “60 Minutes” reported in March that the Chinese-made laminate flooring contained high levels of the carcinogen formaldehyde.

The company is also searching for a new CEO after Robert Lynch abruptly quit the company in May. Founder Thomas Sullivan has taken over as the company searches for a replacement.

Lumber Liquidators Holdings Inc., based in Toano, Virginia, has 360 locations around the country. Its shares slipped 1.3 percent before the stock market opened Monday. Its shares are down about 72 percent in the last 12 months.