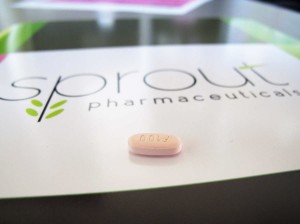 Steve’s breakdown: This FDA support of ADDYI was a huge hurdle for Sprout Pharmaceuticals, women and the agency that will launch the brand. Cindy Whitehead is the CEO and the number is 919.882.0850.

BTW: This company, I suspect, already has an exit strategy ready to go.

RALEIGH, NC: Today the U.S. Food and Drug Administration’s (FDA) joint meeting of the Bone, Reproductive and Urologic Drugs Advisory Committee, and the Drug Safety and Risk Management Advisory Committee determined by an 18 to 6 vote that the benefit/risk profile of Sprout Pharmaceuticals’ ADDYI™ (flibanserin) supports FDA approval for Hypoactive Sexual Desire Disorder (HSDD) in premenopausal women, but only if certain risk management options beyond labeling are implemented.

“We are pleased with the positive outcome of today’s Advisory Committee meeting and the confidence that was expressed regarding the efficacy and safety of ADDYI,” said Cindy Whitehead, chief executive officer, Sprout Pharmaceuticals. “With today’s decision, we are one step closer to bringing to market the first treatment option for the most common form of female sexual dysfunction. We look forward to continuing our work with the FDA as it completes its review of our new drug application, including the discussion of a Risks Evaluation and Mitigation Strategy (REMS).”

HSDD is the most commonly reported form of female sexual dysfunction. The condition has been medically recognized for more than 40 years and is characterized by a deficiency or absence of sexual fantasies and desire for sexual activity, which causes marked distress or interpersonal difficulty, and is not better accounted for by another disorder or to the effects of a substance. HSDD does not encompass normal (e.g., daily or weekly) fluctuations in levels of desire. Approximately one in three women in the United States suffer from low sexual desire, and one in 10 women (16 million women total) are distressed by it.

ADDYI has been studied in more than 11,000 women, making it one of the most studied women’s health products in history. In three 24-week randomized Phase 3, six-month, double-blind, placebo-controlled, parallel-group North American studies of premenopausal women with a mean age of 36 years, ADDYI consistently demonstrated a highly statistically significant difference over placebo on three key endpoints, including increase in sexual desire, decrease in distress from the loss of sexual desire and increase in the frequency of satisfying sex. Women treated with ADDYI showed significant improvements at every point of measurement in all pivotal clinical trials, with benefits seen as early as four weeks and sustained over the 24-week treatment period. In addition to achieving statistical significance on all treatment success standards, the women in the clinical trials themselves judged their improvements to be meaningful to them. The women in the ADDYI clinical trials were in long term relationships for 10 years, they had HSDD for half of that time on average (4-5 years) and within 6 months ADDYI improved 43%-60% of them.

ADDYI safety is derived from clinical trial data in over 8,500 patients, over 1,000 of which were exposed to treatment for at least one year. ADDYI demonstrated a well-characterized and favorable safety profile. The vast majority of the time side effects were mild in severity. The most common side effects observed were dizziness, nausea and sleepiness.

The FDA is not required to accept the panel’s recommendation, but it will consider its decision as part of the ADDYI new drug application (NDA) review. If approved, ADDYI will be the first FDA-approved treatment for HSDD.

About ADDYI
ADDYI is a novel, non-hormonal drug that has been clinically studied in over 11,000 women. ADDYI is a Multifunctional Serotonin Agonist Antagonist (MSAA) and, if approved, would be the first post-synaptic 5HT1A receptor agonist and 5HT2A receptor antagonist available to prescribers for the treatment of premenopausal women with HSDD. It is believed that ADDYI helps restore prefrontal cortex control over the brain’s motivation/rewards structures, enabling sexual desire to manifest. This is thought to be accomplished by the rebalancing of neurotransmitters that influence sexual desire. Specifically, ADDYI increases dopamine and norepinephrine (both responsible for sexual excitement) while transiently decreasing serotonin (responsible for sexual satiety/inhibition) in the brain’s prefrontal cortex. This is likely accomplished by reduced glutamate transmission. In clinical studies, ADDYI was evaluated for its ability to increase the frequency of satisfying sexual events, increase the intensity of sexual desire and decrease the associated distress women feel from its loss.