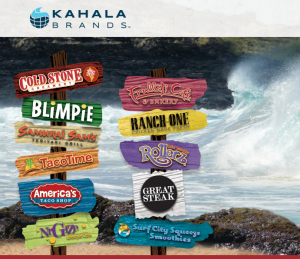 Steve’s breakdown: It’s really not about those two brands. It’s about using this news to get in there to pitch the 16 other brands they have. They include Cold Stone Creamery, Blimpie, Taco Time, Samurai Sam’s Teriyaki Grill, The Great Steak & Potato Company, Johnnie’s New York Pizzeria, Cereality, Kahala Coffee Traders, Rollerz, Ranch1 and America’s Taco Shop.

The acquisition gives Scottsdale, Ariz.-based Kahala 16 franchise brands, four of which include smoothies as a central part of the menu, including Frulatti Café & Bakery, NrGize Lifestyle Café and Surf City Squeeze.

“This purchase expands our smoothie footprint to more than 400 locations and further enables us to satisfy the ever-growing demand from consumers for healthy food options that fit just about every budget,” Michael Serruya, Kahala chairman and CEO, said in a statement.

Planet Smoothie opened in Atlanta in 1995 and currently has more than 100 units, mostly in the Southeast, with a number of openings scheduled for the coming months. The chain serves fresh-to-order smoothies made with its own line of sweeteners and supplements.

Tasti D-Lite LLC acquired the Planet Smoothie franchise system in 2011, with plans to co-brand the two concepts. Tasti D-Lite is a chain of low-calorie soft-serve treats. Combined, the two brands have 128 units. Kahala will consolidate the corporate operations of the company and run them from Scottsdale.

“These two brands are an excellent strategic fit for our company and present an exciting time for future growth,” Stacey Wopnford, vice president of operations at Kahala, who will oversee the two brands, said in a statement. “I look forward to working with franchisees for both brands to help maximize their potential for success.”

The Serruya family, owners of the Canadian Yogen Früz chain, acquired Kahala in 2013.