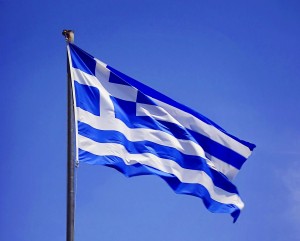 ALTO PALO, CA: Greece’s fate is unknown. But the future of a software startup with the unfortunate name of “Grexit” has already been altered forever.

The world is watching to see if Greece and its European creditors can strike a deal on a new cash-for-reforms agreement by a Sunday (July 12) deadline and avoid a painful ending to a years long economic and political drama: An exit from the eurozone, or what’s now more commonly known as a “Grexit.”

As millions clamor to the web for news of a Grexit, many will mistakenly land on the website of Grexit—a software company that has seen a 20% increase in traffic on its website in recent weeks. Google now lists the company as a “related term” in Greece and the euro trends.

But instead of the extra eyeballs being a boon for business, it’s just “screwed up our analytics,” Grexit cofounder Nitesh Nandy tells Quartz. “We’re getting irrelevant traffic that’s just bouncing off and messing with our conversion rates.”

That’s because the email software startup, which launched in 2011 to make it easier for coworkers to share email and collaborate on projects, is grappling with the fact that its company’s name has been hijacked by an economic drama now associated with failed leadership and long lines at ATMs.

The company is now considering a name change and rebranding, Nandy tells Quartz.

“Grexit has a negative connotation now and I don’t think all the talk about the Greece bailout is going to go away anytime soon,” he says. “It was not possible to predict when we came up with the name in 2010, it’s just bad luck I guess.”

Other companies have met similar fate when branding clashes with current events. Last year, a mobile wallet backed by three large wireless carriers had to change its name from Isis to Softcard after the Islamic State militant group garnered headlines for killing thousands of people in Iraq and Syria.

“However coincidental, we have no desire to share a name with this group and our hearts go out to those affected by this violence,” Isis CEO Mike Abbott said in September 2014. (Softcard has since been acquired by Google.)

The Grexit founders originally wanted to name their company Open Inbox, but the domain name wasn’t available. So, they decided on a combination of the English word “it” and the Latin word “Grex,” which means flock or herd—a nod to their software’s ability to bring people together.

“We thought, it’s obscure, it has good recall value, and the domain name is available so let’s go ahead with it,” Nandy tells Quartz.

And until 2012, the name worked out pretty well. The company was part of the Morpheus startup incubator in India. It raised seed funding and opened an office in Palo Alto.

Then, Citigroup economists Ebrahim Rahbari and Willem Buiter issued a research note assessing the possibility of Greece leaving the eurozone. At the time, Greece was on the precipice of accepting a second bailout and Citi set the chance of a “Grexit” at 50%. A new turn of phrase made its way into the global lexicon.

Grexit the software company stayed loyal to its original moniker for awhile, attracting a customer list of 1,000 small businesses before Greece’s economic crisis flared up again this summer and prompted Grexit’s founders to reconsider.

Maybe there’s no such thing as bad publicity. Or maybe it’s time to learn from the Greeks and consider an exit.