Tableau Software rakes in $254 million on IPO: Time to advertise

Tableau Software rakes in $254 million on IPO: Time to advertise 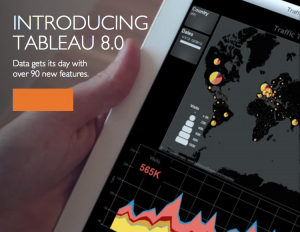 Steve’s breakdown: We got a giant IPO day for Tableau Software and they are going to need to get the word out about their busines. The stock holders will demand it so make that call.

SEATTLE, WA: Tableau Software shares soared in their trading debut Friday after the company and some of its investors raised about $254.2 million in its initial public offering.

The shares jumped $18.32, or 59 percent, to $49.32 with about a half-hour of trading to go in New York. Earlier, the company sold 5 million shares for $31 each and total proceeds of $155 million. Certain shareholders sold an additional 3.2 million shares at the same price for $99.2 million.

The shares are trading under the symbol “DATA.”

The offering’s underwriters – Goldman, Sachs & Co. and Morgan Stanley & Co. – have a 30-day option to buy up to 1.2 million more shares from Tableau, which would generate $38.1 million more in proceeds.