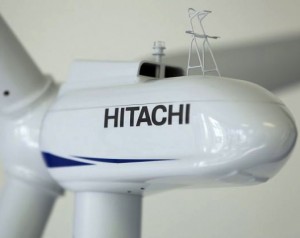 Steve’s breakdown: They are saying the market is ripe in California for anyone who wants to sell power, not just utilities. In case you didn’t know, California is the 8th largest economy in the world so don’t worry about the size of the market – just go for it.

TOKYO, Japan & TARRYTOWN, NY: Hitachi unveiled an energy-storage system that the company said will support wind and solar power and allow users to sell electricity into deregulated markets such as California.

The units can be installed on high-voltage power lines, and will be able to capture excess energy produced by wind and solar sources so it can be sold back into the network when the demand for power exceeds the supply. The systems, which include telecommunications and lithium-ion battery technologies developed by Tokyo’s Hitachi, will also minimize volatility on the power grid, company officials said Tuesday.

“As the use of renewable energy expands, stabilization has become a very important priority,” Masaaki Nomoto, general manager for the company’s transmission and distribution systems division, said through a translator. He said the potential customers for the technology will include anyone who wants to sell power into the market, not just utilities.

Energy storage is becoming an increasingly important part of the nation’s electric grid as more solar and wind sources – which can’t provide power when the sun isn’t shining or the wind isn’t blowing – connect to the network. As more and more homes install small-scale renewable devices, they’re also becoming less dependent on traditional utilities for electricity.

“We believe that there’s no such concern” about reducing the need for power from utilities, Tatsuro Ishizuka, president of Hitachi’s power systems company, said through a translator. The systems, known as CrystEna, will provide energy to instantaneously stabilize the grid, he said.

Hitachi will begin testing the product in North America in the first three months of 2014, with a goal of selling it by the end of 2015, Ishizuka said.

“It’s important to help the customers continuously make income” for the market to stabilize the grid, known as frequency regulation, Nomoto said.

California is requiring its utilities, including Edison International and PG&E Corp., to have at least 1.3 gigawatts of storage capacity by 2020, and suppliers such as Hitachi are looking to capitalize on this new requirement.

Nomoto said the state is one where Hitachi may find a market for the CrystEna product, which uses 1 megawatt lithium- ion batteries and is enclosed in a container. The company has a partner in its pilot program for the gear, which he declined to identify. He said Hitachi benefits by sharing research costs with its unit that develops lithium-ion batteries for electric vehicles.

“Mass production will help give us the competitive advantage in terms of price,” Nomoto said.

Hitachi estimates that the size of the U.S. market for devices that help stabilize the grid will be 20 gigawatts by 2020, according to a company brochure. The potential market size for its energy-storage system is 7.5 gigawatts, it said.