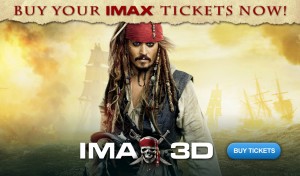 Steve’s breakdown: The new guy is tasked with “tapping into the emotional connection consumers have with The IMAX Experience” around the globe. And I guess this ex-Red Bull executive can also tap into the “Red Bull gives you wings” idea too but he’s never worked with Hollywood before. He’s going to need your help with that if that’s your bag.

“Marc has the business acumen, the leadership skills and the experience to help us further develop our brand and our reputation,” said Gelfond. “He will help us determine new paths that can tap into the emotional connection consumers have with The IMAX Experience®. We are very pleased to welcome him onboard.”

Marc de Grandpre’s 15-year career spans a distinguished group of consumer products and sports entertainment brands, with responsibilities including Global Product Manager, Director, Vice-President, and Managing Director. He has spent the majority of his career with Red Bull Energy drink and the balance with Nike /Bauer Hockey and Qualcomm. Most recently Mr. de Grandpre was the chief marketer for Qualcomm’s Firethorn division, where he led the successful development and launch of a new mobile commerce brand.

Prior to Qualcomm, he worked with Red Bull North America and was part of the original marketing team involved in Red Bull’s launch in the U.S. As director of marketing, Mr. de Grandpre managed the brand development efforts for the Northeast and East business units. Following a successful career in Red Bull’s beverage business, he was named Managing Director of the New York Red Bulls, a Major League Soccer professional sports franchise. Marc spearheaded the rebranding and repositioning of the franchise while guiding the initial development of Red Bull Arena. Previously, he worked in marketing at Bauer Nike Hockey.

Mr. de Grandpre earned an MBA as well as a BS from Southern New Hampshire University. He will relocate to the New York area from Atlanta with his wife and two children.

IMAX Corporation is one of the world’s leading entertainment and technology companies, specializing in the creation and delivery of premium, awe-inspiring entertainment experiences. With a growing suite of cutting-edge motion picture and sound technologies, and a globally recognized entertainment brand, IMAX is singularly situated at the convergence of the entertainment industry, innovation and the digital media world. The industry’s top filmmakers and studios are utilizing IMAX theatres to connect with audiences in extraordinary ways, and as such, the IMAX network is among the most important and successful theatrical distribution platforms for major event films around the globe. The Company’s new digital projection and sound systems – combined with a growing blockbuster film slate – are fueling the rapid expansion of the IMAX network in established markets such as North America, Western Europe, and Japan, as well as emerging markets such as China and Russia. IMAX theaters deliver the world’s best cinematic presentations using proprietary IMAX, IMAX 3D, and IMAX DMR (Digital Re-Mastering) technologies. IMAX DMR enables virtually any motion picture to be transformed into the unparalleled image and sound quality of The IMAX Experience.

IMAX is headquartered in New York, Toronto and Los Angeles, with offices in London, Tokyo and Shanghai. As of March 31, 2011, there were 528 IMAX theatres (408 commercial, 120 institutional) operating in 46 countries.